Although the Pennsylvania Museum School of Industrial Art (PMSIA, now The University of the Arts' College of Art, Media and Design) and the museum in PMSIA (now the Philadelphia Museum of Art) were founded as one institution, they were never housed together in the same building. The museum was in Memorial Hall in Fairmount Park until the 1920s when it moved to its current location on the Benjamin Franklin Parkway. The school moved many times before settling into its Broad and Pine Streets residence in 1893.

Locations of the art school 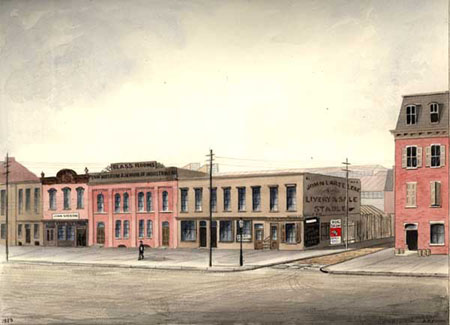 312 North Broad Street. Brick building with figure in front. Sign above building says
"Class Rooms. Penn. Museum & School of Industrial Art."
Image courtesy of The Library Company of Philadelphia. Do not use without express permission of The Library Company. For a larger image and more information about this watercolor by Benjamin R. Evans, please see this image, part of the Places in Time Web site at Bryn Mawr College. Additional works by Evans are also available at the Bryn Mawr site.


"In the spring [of 1879], it became evident to the Trustees that, in consequence of the uses to which a building recently erected in the immediate vicinity of the school was put [reason not specified], they would be compelled shortly to abandon the location. Pending the consideration of this subject, an invitation was received from the Board of Managers of the Franklin Institute, inviting this corporation to remove its schools to the Institute building, No. 15 South Seventh Street. The Board offered the use of their school rooms rent free, and engaged to make the alterations necessary for the accommodation of the scholars. This generous offer was accepted by your Trustees, and at the close of the spring term the lease of No. 312 North Broad street [sic] was given up, and the furniture removed to the Franklin Institute. The fall term opened September 29 [1879], in the latter building, since which time the school rooms have been open daily for the use of the scholars."
Source: PMSIA, 4th Annual Report, [for the fiscal year ending November 30] 1879, p. 14-15.


"The [fall 1879 school] session began with a diminished from last year, but the attendance increased so rapidly that before the first month was passed the accommodations in the Franklin Institute, which were shared with the classes of the latter, proved insufficient for both schools. A speedy change of location having thus become necessary, the rooms at 1709 Chestnut Street, which the school is now occupying, were rented. The removal was made on November 8th [1879], and its advantages are already evident."
Source: PMSIA, 5th Annual Report [for the fiscal year ending November 30], 1880, p. 12-13.


"[The school] was opened during the winter of 1877-78 in temporary rooms in Industrial Art Hall, at Broad and Vine Streets. It was afterwards removed to the rooms of the Franklin Institute, at 15 South Seventh Street, and again in 1880 to the building 1709 Chestnut Street, where it remained until its removal, in 1884, to the building which it occupies at present [1336 Spring Garden Street]. The classes were very small for several years, but the attendance has increased rapidly since 1884."
Source: PMSIA, Circular, 1889/1890, p. 9-10.


Mr. William Weightman gives $100,000.00, and a like amount is raised through subscriptions. PMSIA buys the Broad & Pine Streets property, originally built for the Pennsylvania Institution for the Deaf and Dumb (now Pennsylvania School for the Deaf), and moves there in the summer of 1893. Classes open September 10, 1893.

"The greatest event in the history of our institution has happened since our last annual meeting. The property formerly belonging to the Institution for the Deaf and Dumb at Broad and Pine Streets, two hundred feet by four hundred feet, with its large buildings fronting on four streets, has become ours by purchase, and now we have, for the first time, plenty of room for the development of our Industrial Art School in all its many departments. This most fortunate event was made possible by the generous offer of Mr. William Weightman, who gave the sum of $100,000 contingent upon a like sum being raised by the Trustees and the Associate Committee of Women. Of this sum nearly one half was raised by the steady and heroic efforts of the Associate Committee of Women, who worked with us and for the institution in the most indefatigable way with this brilliant result. ... Our $100,000 was collected by great efforts, and the struggle to secure it, in the face of an opposition by a syndicate of capitalists who wanted to buy the property to tear down the buildings and erect a double row of dwelling-houses on that site, was most spirited and prolonged. The Syndicate withdrew at last, very gracefully, and we bought the property. The deed was signed for it on May 12th, 1893, the amount of the purchase sum being $540,050, of which sum $350,000 remains on mortgage. ... During the summer alterations were made in several parts of the buildings to adapt them more completely to our needs in the various departments of the School, and on September 10th, 1893, the classes were opened in the new School Buildings. Vast as these buildings are, it is a source of amazement to all who are familiar with them to find out that we could readily occupy nearly the whole of two entire floors all around from Broad Street to Fifteenth Street--a fact which shows how very much cramped for room we had been in our old quarters, and makes us wonder how we managed to do what was done."
Source: PMSIA, 18th Annual Report ... For the Year Ending December 31, 1893, p. 9-11. 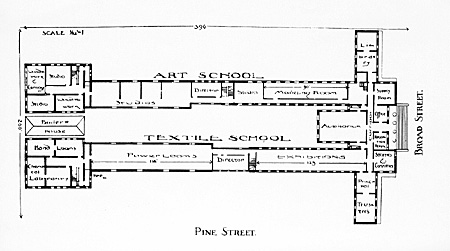 Floorplan of Hamilton Hall as it appears in the 1894-95 Circular of the School of Applied Art, School of Industrial Art of the Pennsylvania Museum. Scale is 1/32"/1". © 2002 The University of the Arts ® • University Libraries • University Archives 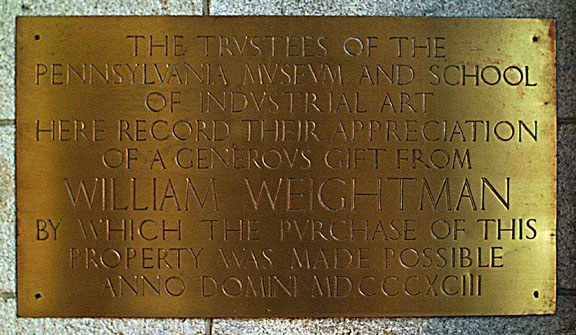 This plaque honoring the gift of William Weightman was placed inside Hamilton Hall in 1894. At some point it was taken down and stored, and in 1996 it was mounted on the building's exterior on the north side of the portico. Look up to the right as you enter the building and you'll see it.