Nadia Chilkovsky Nahumck, 98, founder of the Philadelphia Dance Academy, died April 23, 2006, at the Sunrise Senior Living Center in Blue Bell, Pennsylvania. Born in Kiev, Russia, in 1908, she came to Philadelphia as a child. Her husband, Nicholas Nahumck, to whom she was married in 1941, died in 1993. 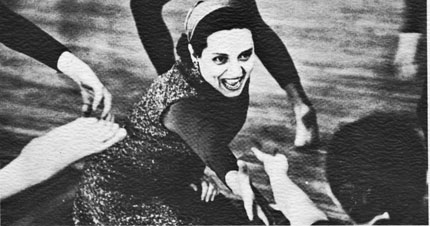 Nahumck at a workshop circa 1967
© The University of the Arts. Do not use without permission.

Wakin, Daniel J. "Control of Dances Is at Issue In Lawsuit." New York Times, Tuesday, September 4, 2007, p. E1.
Although this article does not mention Chilkovsky Nahumck, it does provide some discussion of the New Dance Group.

Of, By, and For the People: Dancing on the Left in the 1930s. Edited by Lynn Garafola; with contributions by Russell Gold, Ellen Graff, Edna Ocko, John O. Perpener III, Stacey Prickett, Barbara Stratyner; preface by Barbara Melosh. Madison, WI: Society of Dance History Scholars, 1994. See index under Chilkovsky, Nadia.