The University of the Arts' Dorrance Hamilton Hall is an excellent example of major works by at least two if not three of America's most important 19th-century architects: John Haviland, William Strickland (attributed), and Frank Furness. In addition to its architectural significance, Dorrance Hamilton Hall has, since its completion in 1826, housed historically important cultural and educational institutions. Today it is the oldest extant building on Broad Street, Philadelphia's main north-south corridor, along which several of the city's most important and prominent businesses and cultural institutions are located. It is also a prominent and vibrant part of Philadelphia's first designated cultural district, The Avenue of the Arts. Simply called the Haviland/Strickland building for many years, it was dedicated and named for long-time board member and donor Mrs. Dorrance H. Hamilton in 1996.

ARCHITECTURAL RESEARCHERS: The University of the Arts does not have any early architectural plans or drawings of Hamilton Hall. It is widely held by architectural scholars that no early drawings exist. Please consult historical records for the Pennsylvania Institution for the Deaf and Dumb (the organization that commissioned the original building) at the Historical Society of Pennsylvania, the Library Company of Philadelphia, the Athenaeum of Philadelphia, and the Philadelphia Historical Commission. You will need to know UArts' various names over the years to do a thorough search.

Early Pennsylvania Museum and School of Industrial Art (PMSIA, now UArts) annual reports often mention changes and alterations to the building. Keep in mind that PMSIA did not occupy the building until 1893.

The first of the building's three major building phases occurred in 1824 when John Haviland (1792-1852) designed a three-story, E-shaped building in the Greek Revival style for the Pennsylvania Institution for the Deaf and Dumb (now Pennsylvania School for the Deaf). Broad Street in the 1820s was still an undeveloped wooded area and rural pastureland on the outskirts of the city, which was then centered around Independence Hall at 5th and Chestnut Streets and along the Delaware River. The Institution was among the first social and cultural organizations to move here to escape the noise of the city. Haviland's granite-clad four-columned Doric portico immediately became a well-known landmark. Architecturally, Haviland may have taken some cues from Benjamin Latrobe's then-recently completed public water works pumping station which was then located on Center Square, where City Hall is today. As a popular past-time, city dwellers would take promenades or carriage rides out to the rural countryside of Broad Street to see these two impressive and memorable Greek Revival structures.

The laying of the cornerstone on June 15, 1824, was reported as follows and is transcribed exactly:

Democratic Press [Philadelphia], June 16, 1824:
I yesterday attended at the corner of Broad and Pine streets to witness the ceremony of laying the corner stone of the new building now erecting by the Pennsylvania Institution for the Deaf and Dumb. I can truly say that never was time passed more entirely to my satisfaction. The day was fine and the event well calculated to arouse public attention, for it gave assurance of permanency and stability to one of the most valuable of the numerous charitable institutions which adorn the city of Philadelphia. The company assembled was, therefore, large and respectable. At an early hour the children of the institution, 74 in number, accompanied by Mr. Weld, the principal, the assistant teachers and the matron appeared upon the ground, and took their station within the foundation walls of the building. The ceremony was opened by an impressive address and solemn prayer from the Rt. Rev. Bishop White, President of the institution. A charity which calls forth the active and efficient services of one so venerable, so universally respected and so generally beloved as is Bishop White cannot but be entirely worthy of public patronage, and will assuredly never make a vain appeal to the benevolence of the citizens of Philadelphia. An address was then delivered by J. R. Ingersoll, Esq., which was characterized by his usual ability and eloquence.

In the plan of the building the Tuscan and Doric orders are stated to be harmoniously united and when finished it is expected to be as great an ornament to the city as the institution itself is honorable to the citizens of Philadelphia. "We participate," says the New York Evening Post, "in the pleasure which it gives to every philanthropic mind that measures are thus taking to render such an institution permanent. The gratification would be greatly increased if a similar spirit prevailed in our own city."

John Haviland was born in Somerset, England, in 1792. He secured an apprenticeship with an architect in 1811 where he received his first training. He later secured a position with the Russian Imperial Corps of Engineers in Russia. It was here that he met John Quincy Adams, who was the stime serving as Russian Minister for the United States. Adams encouraged Haviland to relocate to the United States, which Haviland did, setting up an architecture practice in Philadelphia, then the largest city in North America. In addition to designing some of the young nation's most notable examples of Greek Revival architecture, Haviland also wrote one of the most important instructional works on architecture, "The Builder's Assistant," which was used as a basic reference work throughout the 19th century. Haviland's Eastern State Penitentiary (1821, Philadelphia PA) was one of America's most noteworthy structures in the 19th century and its groundbreaking design served as a model for hundreds of prisons worldwide, including the famous "Tombs" of New York City that he designed in 1835. Haviland also designed Philadelphia's Walnut Street Theater (1827), the oldest theater still standing in America.

Phase II, 1838: William Strickland
In the mid-1830s the trustees of the Pennsylvania Institution for the Deaf and Dumb probably hired the architect William Strickland (1788-1854) to design additions to the main Haviland-designed building. These large wings running west toward Pine Street were completed in 1838. Strickland had trained as an apprentice under architect Benjamin Latrobe. Strickland's Second Bank of the United States (1815), built in Philadelphia for Nicholas Biddle, is considered by many architectural historians to be the finest example of Greek Revival architecture in America. Strickland's last major work was the State House for Tennessee. He died during construction of this building and is entombed beneath it.

In 1854 the north-south facade of the building was extended, although it is not known who did the work. Source: The Annual Report of the Board of Directors of the Pennsylvania Institution for the Deaf and Dumb for 1854 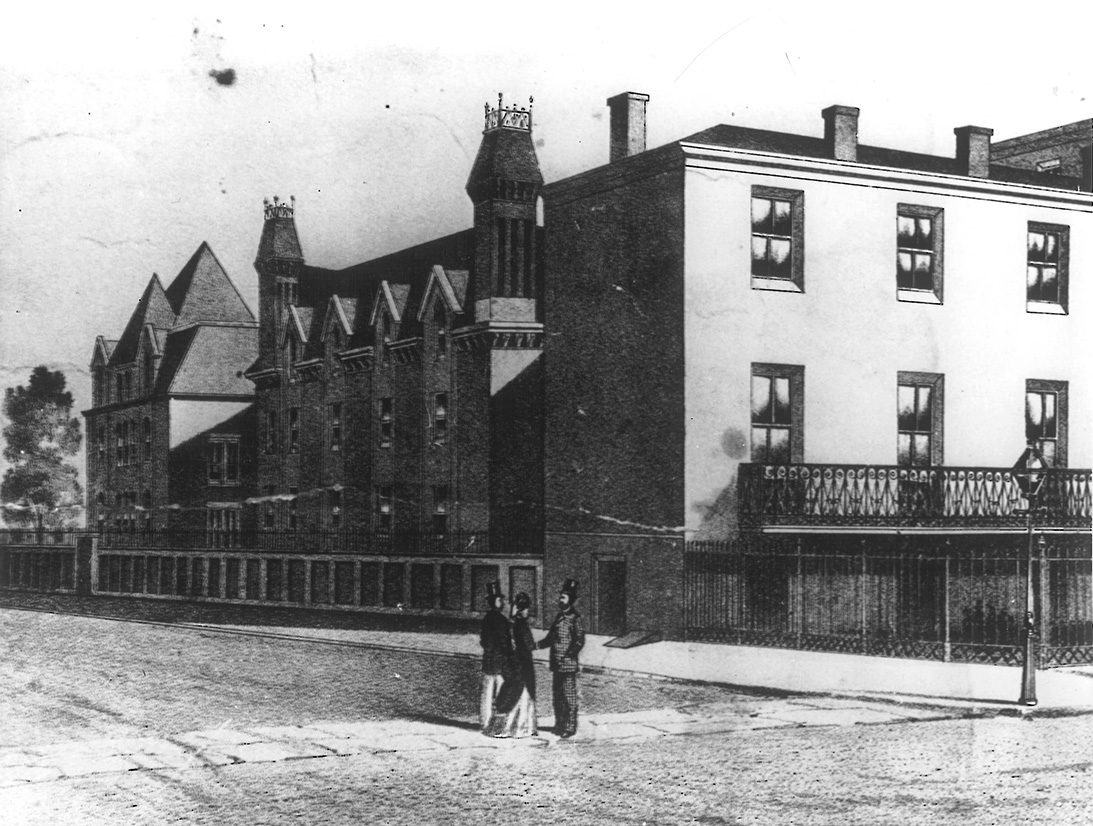 In 1875, Frank Furness (1830-1912) designed two Victorian Gothic wings connecting the Haviland/Strickland building to 15th Street. The Institution now stretched for an entire city block, from Pine Street to Delancey Street and from Broad Street to 15th Street, and the size of the building had doubled. In addition to the large wings, Furness also designed the carriage house (now used as a sculpture studio) and the two long red brick walls that enclose portions of the Furness wings. Furness was a noted Victorian architect who also designed the Pennsylvania Academy of the Fine Arts (1876), the Fisher Fine Arts Library (1890) at the University of Pennsylvania, and the old Broad Street Station for the Pennsylvania Railroad.

Following receipt of a gift of $100,000.00 from William Weightman, the trustees of the Pennsylvania Museum and School of Industrial Art (PMSIA) purchased the building in 1893 following the removal of the Institution for the Deaf and Dumb to Henry Avenue in the Germantown neighborhood of Philadelphia.

PMSIA had been founded in 1876 in response to the preparations for the U.S. Centennial International Exhibition held in Fairmount Park. The school of PMSIA was made of the School of Applied Art (also called Industrial Art) and the Philadelphia Textile School, and the museum in PMSIA was what is now the Philadelphia Museum of Art. In addition to housing school facilities, classrooms and studios, the building was also home to several arts organizations, including the T-Square Club (architects), the Mendelssohn Club, the Symphony Society of Philadelphia, and the Manuscript Club. Eventually space limitations caused the Textile School to separate and move to its present location at Henry Avenue and Schoolhouse Lane; for many years it was known as Philadelphia College of Textiles and Science and today is called Philadelphia University.

The annual report "for the year ending December 31, 1894" states that a mural tablet honoring "the generous gift" of William Weightman has been placed in the entrance hall of the building (p. 9). The report of the school principal in the same report states that "an improvement in the School building of much importance has been made in the removal of the small rooms and narrow passages near the main entrance, throwing the whole space into which one enters from the street into an open lobby. The work, which was done under the supervision, and at the expense, of the Associate Committee of Women, constitutes a very handsome improvement, indeed. The marble floor is the gift of Mr. William Weightman. The gas fixtures--two chandeliers and four wall-brackets, are a gift from the Thackara Manufacturing Company." PMSIA 19th annual report for the year ending December 31, 1894, p. 21.


The building has been renovated here and there several times over the years. According to the PMSA Newsletter (Philadelphia Museum School of Art) from Fall 1956, page 1,

"First, about two years ago, the thickened layers of paint were removed and the granite facade and sandstone columns were revealed in their original textures. More recently the worn marble steps have been replaced by slabs of the same local blue-veined marble. The old cast-iron fence, which had disintegrated badly in recent years, was removed and low granite walls before each wing have created two courts in which will be gravel walks, shrubbery and trees. These will tend, partially, to mask the wings and emphasize the projecting mass of the portico.

This work has been under the direction of our school architect, Norman Rice, who says 'The central portico, dignified in proportion and severe in detail is an outstanding monument of the Greek Revival period. Designed by an excellent architect, it is worthy of every respect. Its architectural qualities far surpass those of the two side wings, which were added later. The fence, a still later addition, was merely a typical example of cast iron work of the 1880s. Both the fence and the wings diminish the architecture of the portico. The basic design idea of this project has been to accentuate the monumental qualities of the portico.'"


1983: The Great Hall/Solmssen Court
The re-opening of the building was marked March 25, 1983, with a special alumni exhibit of the work of alumnus and former faculty member Samuel Yellin.

The content of this page was originally written by Eugene Bolt, then-Associate Director of Development. It has been added to since then by Sara MacDonald, Public Services Librarian.

Sources: Please note that the links to the architects' names on this page are all to the Philadelphia Architects and Buildings Web site, an outstanding authoritative and scholarly resource for Philadelphia architectural research. Please see About the PAB Project for more information.