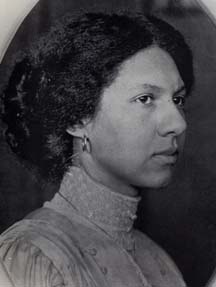 © Photograph courtesy of Dr. John L. Fuller, Sr. Do not use without express permission of Dr. Fuller.

Mentioned in the June 1914 "Newsletter of the Alumni Association of the Pennsylvania Museum & School of Industrial Art", p. 29: "Mrs. Meta Vaux Warrick-Fuller, one of our active members, exhibited at the Exposition held by the New York State Emancipation Proclamation Commission in October 1913, a group eight feet high representing a newly emancipated man and maiden, standing in the shelter of a decapitated tree that has the semblance of a human hand stretched above them. This hand represents humanity which is pushing them out into the untried work [sic - world?]. Mrs. Fuller has just had an exhibition of her work at South Framingham, Mass." 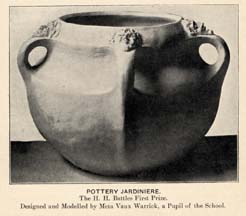 Caption reads "Pottery Jardiniere. The H. H. Battles First Prize. Designed and Modelled by Meta Vaux Warrick, A Pupil of the School." Source: Pennsylvania Museum and School of Industrial Art. Annual Report for the Year Ending May 31, 1904, page 38. 1903-04 was the first year that pottery/ceramics was officially offered as a program, with Leon Volkmar as pottery instructor.
© University of the Arts • University Libraries • University Archives. Do not use without permission. 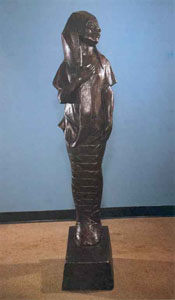 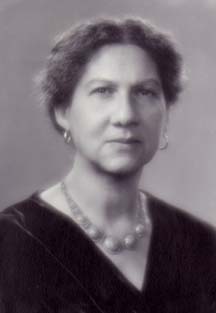 © Photograph courtesy of Dr. John L. Fuller, Sr. Do not use without express permission of Dr. Fuller.

Meta is pronounced "mee-tah", according to Fuller's grandson, Dr. John L. Fuller, Sr. Best known for her sculpture, in particular the 1921 Ethiopia Awakening (owned by the Schomburg Center for Research in Black Culture of the New York Public Library), and the 1919 In Memory of Mary Turner: As a Silent Protest Against Mob Violence (Museum of African American History, Boston & Nantucket), Fuller was an accomplished fine artist who also did a great deal of stage design (see Kathy A. Perkins' article in the bibliography below) in the Boston area and in Framingham, Massachusetts, where she lived after her marriage in 1909 to Dr. Solomon Fuller.

She seems to have always been interested in learning: after receiving her Pennsylvania Museum School of Industrial Art (PMSIA) diploma in 1898, she stayed on for another year and received the Mrs. George K. Crozer Prize of $20.00 for the best work in modelling [sculpture] in 1899. Upon her return to Philadelphia from her studies in Paris, where she had studied at the Academie Colarossi and at the Ecole des Beaux Arts and met Henry Ossawa Tanner and Auguste Rodin, she enrolled at PMSIA again to study in the new pottery classes, offered for the first time in December 1903 "under the direction of Mr. Leon Volkmar" (PMSIA Annual Report for 1904, page 36) and won the 1904 Battles Prize for the jardiniere shown above. She also studied at the Pennsylvania Academy of the Fine Arts in Philadelphia around that time. According to Perkins' article listed below, Fuller also took courses in religious pageantry and theatrical lighting (Perkins, page 70).

The Danforth Art Museum in Framingham, MA (Fuller lived for many years in Framingham), has a large collection of Fuller's work. Please see The Meta Vaux Warrick Fuller Special Collection.

Bearden, Romare and Harry Henderson. A History of African-American Artists: From 1792 to the Present. New York : Pantheon Books, c1993.
UArts Greenfield Library N 6538 .N5 B38 1993
Mentions Fuller as an influence on Augusta Savage and Fuller's relationship with Lois Jones.

250 Years of Afro-American Art : An Annotated Bibliography / Lynn Moody Igoe with James Igoe. New York : Bowker, 1981.
UArts Greenfield Library REF Z 5956 .A47 I38
This is a highly recommended source for finding books and articles from a wide range of publications, including The Crisis, Journal of Negro Education, Journal of Negro History, Negro History Bulletin, and a variety of newspapers.

Questions? Please read the paragraph on requests for archival information.

Send questions or remarks about this page to Sara J. MacDonald, Director for Library Services.